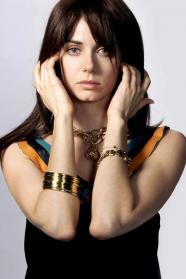 Mia Kirshner (born January 25, 1975) is a Canadian actress and social activist who works in movies and television series. She is best known for her portrayal of Jenny Schecter on The L Word (2004–2009) and for her role in the 2006 crime film The Black Dahlia as Elizabeth Short.
2006 - The Black Dahlia
2008 - Miss Conception
2012 - The Barrens