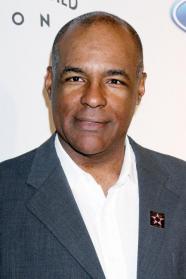 Dorn was born in Luling, Texas, the son of Allie Lee (née Nauls) and Fentress Dorn, Jr. He grew up in Pasadena, California. He studied radio and television production at the Pasadena City College. From there he pursued a career in music as a performer with several different rock music bands, travelling to San Francisco and then back to Los Angeles.Dorn first appeared in Rocky (1976) as Apollo Creed's bodyguard, though he was not credited. He first appeared as a guest on the television show W.E.B. in 1978. The producer was impressed with his work, so he introduced Michael to an agent who introduced him to acting teacher Charles Conrad to study acting for six months. He then landed a regular role on the television series CHiPs.
1994 - Star Trek: Generations
1996 - Star Trek: First Contact
1998 - Star Trek: Insurrection
2002 - Star Trek: Nemesis
2011 - 3
2015 - Ted 2