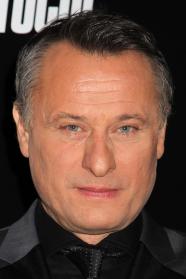 Rolf Åke Michael Nyqvist (born November 8, 1960 in Stockholm) is a Swedish actor. Educated at the School of Drama in Malmö, he became well known from his role as police officer Banck in the first series of Beck movies made in 1997. He is recently most recognized for his role in the internationally acclaimed The Girl with the Dragon Tattoo Trilogy as Mikael Blomkvist and is one of Sweden's most beloved actors.