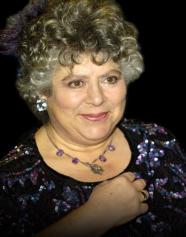 From Wikipedia, the free encyclopedia. Miriam Margolyes, OBE (born 18 May 1941) is an English actress and voice artist. Her earliest roles were in theatre and after several supporting roles in film and television she won a BAFTA Award for her role in The Age of Innocence (1993).

Description above from the Wikipedia article Miriam Margolyes, licensed under CC-BY-SA,full list of contributors on Wikipedia.
1995 - Babe
2005 - Ladies In Lavender
2008 - The Dukes
2010 - Legend of the Guardians: The Owls of Ga’Hoole
2017 - The Man Who Invented Christmas