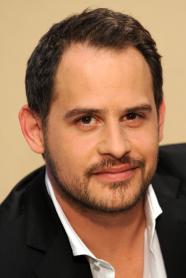 Moritz Bleibtreu (born August 13, 1971) is a German actor. Bleibtreu was born in Munich, the son of actors Monica Bleibtreu and Hans Brenner, and the great-grand-nephew of the actress Hedwig Bleibtreu. Bleibtreu grew up in Hamburg. His first appearance on TV was in the late seventies on a children's television series called Neues aus Uhlenbusch, written by his mother Monica and Rainer Boldt. This was followed by a role in Boldt's Ich hatte einen Traum and alongside his mother in the miniseries Mit meinen heißen Tränen. After he left school when he was 16, he lived in Paris and New York City where he attended acting school. In 1992 he began his acting career at the Schauspielhaus in Hamburg. He also had numerous small parts in television productions. His roles include the Gray Ghost in the film Speed Racer, Andreas Baader in The Baader Meinhof Complex, Manni in Run Lola Run, and Tarek Fahd in the psychological thriller Das Experiment. Description above from the Wikipedia article Moritz Bleibtreu, licensed under CC-BY-SA, full list of contributors on Wikipedia.
2002 - Das Experiment
2006 - Agnes And His Brothers (Agnes und seine Brüder)