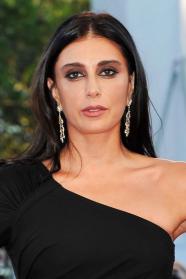 Nadine Labaki (born February 18, 1974) is a Lebanese actress and director. She is one of the well known directors in the Arabic music video industry. Nadine is usually credited for bringing artists into the scene.

In 2007, Labaki co-wrote, directed, and starred in her feature-film debut, Caramel, which became an international sensation at film festivals and went on to achieve box office success. It showcases a Beirut that most are not familiar with. Rather than tackle political and religious issues which have plagued Lebanon, she presents a romantic comedy that deals with five Beirut women who gather at a beauty salon and deal with love, sexuality, tradition, disappointment, and everyday ups and downs.

The film garnered Labaki much acclaim as both a director and actress, and put her on Variety's 10 Directors to Look Out for List.