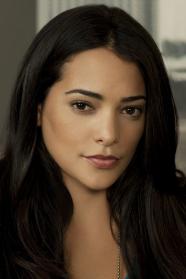 Natalie Martinez (born July 12, 1984, height 5' 6½" (1,69 m)) is an American actress and model. Martinez is known as the spokesmodel for JLO by Jennifer Lopez, and for her supporting role in the 2008 feature filmDeath Race. She also starred in a music video titled "Rain Over Me" by Pitbull, also featuring Marc Anthony. She has appeared in several music videos and telenovelas. She starred in the television crime drama Detroit 1-8-7 as Detective Ariana Sanchez. Martinez currently stars as Deputy Linda Esquivel in the television drama Under the Dome.Martinez was born in Miami, Florida on July 12, 1984 and is of Cuban ancestry. She is a 2002 graduate of St. Brendan High School. Martinez is perhaps best known for her role as Michelle Miller on MyNetworkTVtelenovela, Fashion House. She was cast as a major character in Chuck, and appears in first-season promotional pictures of the cast. However, her character was cut before the series aired. She starred in the 2008 film Death Race. Martinez also starred in the television crime drama Detroit 1-8-7 as Detective Ariana Sanchez, which was cancelled after one season. She currently stars as Deputy (later Sheriff) Linda Esquivel in the CBS television drama Under the Dome, based on the novel of the same name by Stephen King. She also appeared in the 2012 film End of Watch, and the 2013 film Broken City.
2008 - Death Race
2015 - Self/less