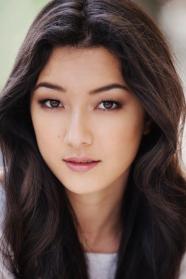 Natasha Liu Bordizzo is an Australian actress. She was born on the 25th of August 1994 in Sydney. Her father is of Italian heritage and her mother of Chinese. Natasha has an academic background, having deferred a law degree to pursue work in film. She also holds a strong background in sports - particularly martial arts, having achieved a black-belt in Taekwondo. Natasha will make her first major feature film debut in 'Crouching Tiger, Hidden Dragon: The Green Legend'
2017 - The Greatest Showman