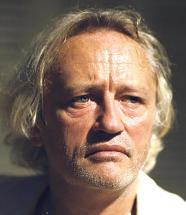 Born in Paris into a family of modest means, his father was Danish and his mother was French. He has won two César Awards for Best Supporting Actor for De battre mon cœur s'est arrêté and Un prophète, both films where he was directed by Jacques Audiard.

Description above from the Wikipedia article Niels Arestrup, licensed under CC-BY-SA, full list of contributors on Wikipedia.
2005 - The Beat That My Heart Skipped
2011 - War Horse
2015 - By the Sea
2018 - At Eternity's Gate