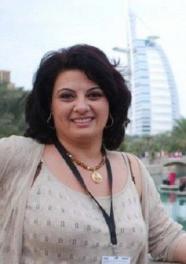 Nisreen Faour is a Palestinian actress best known for her role as Muna in the 2009 American film, Amreeka.

Faour was born in Tarshiha, Palestine and moved to the United States to study theater and performance when she was 16. She studied theater directing at the University of Haifa. She has performed in a number of award - winning theatrical plays. She also appeared in films such as In the Eighth Month directed by Ali Nassar and Jamr Alhikaya (Whispering Embers). Her television appearances include Family Deluxe and Mishwar Al-Joma.

Faour's performance as Muna Farah, a Palestinian immigrant to the United States in the 2009 independent film Amreeka, received high marks from film critics. American film critic Kenneth Turan argues that, while all of the casting choices "are excellent, it is Palestinian actress Nisreen Faour as the irrepressible Muna who truly owns the picture."

Description above from the Wikipedia article Nisreen Faour, licensed under CC-BY-SA, full list of contributors on Wikipedia.​
2009 - Amreeka