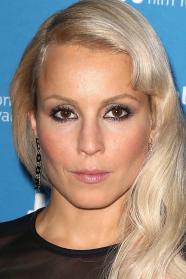 Noomi Rapace, born Noomi Norén; 28 December 1979 in Hudiksvall, is a Swedish actress. She is best known for her portrayal of Lisbeth Salander in the Swedish/Danish film adaptions of the "Millennium Trilogy": The Girl with the Dragon Tattoo, The Girl Who Played with Fire and The Girl Who Kicked the Hornets' Nest. She will play the roles of Sim and Shaw in the upcoming films Sherlock Holmes: A Game of Shadows and Prometheus, respectively.
2010 - The Girl who Kicked the Hornet's Nest (Luftslottet som sprängdes)
2011 - Sherlock Holmes: A Game of Shadows
2012 - Prometheus
2013 - Dead Man Down
2013 - Passion
2014 - The Drop
2015 - Child 44
2017 - Alien: Covenant
2017 - Bright