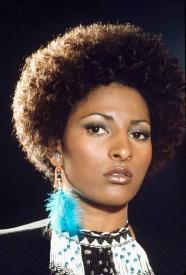 From Wikipedia, the free encyclopedia Pamela Suzette "Pam" Grier (born May 26, 1949) is an American actress. She became famous in the early 1970s, after starring in a string of moderately successful women in prison and blaxploitation films such as 1974's Foxy Brown. Her career was revitalized in 1997 after her appearance in Quentin Tarantino's film Jackie Brown. She received a Golden Globe nomination for Best Actress. She has also been nominated for a SAG as well as a Satellite Award for her performance in the iconic film Jackie Brown. She received an Emmy Award nomination for her work in an Animated Program Happily Ever After: Fairy Tales for Every Child. Rotten Tomatoes has ranked her as the second Greatest Female Action Heroine in film history. Director Quentin Tarantino remarked that she may have been cinema's first female action star. Description above from the Wikipedia article Pam Grier, licensed under CC-BY-SA, full list of contributors on Wikipedia.
1997 - Jackie Brown
2001 - Bones
2003 - Love The Hard Way
2010 - Just Wright
2011 - Larry Crowne
2012 - Woman Thou Art Loosed: On the 7th Day