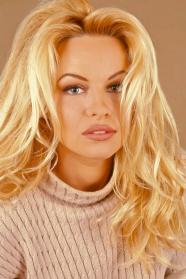 Pamela Denise Anderson (born July 1, 1967) is a Canadian-American actress, model, producer, author, activist, and former showgirl, known for her roles on the television series Home Improvement, Baywatch, and V.I.P. She was chosen as a Playmate of the Month for Playboy magazine in February 1990.[1] For a time, she was known as Pamela Anderson Lee (or Pamela Lee) after marrying Mötley Crüe drummer Tommy Lee. She maintains dual American and Canadian citizenship.