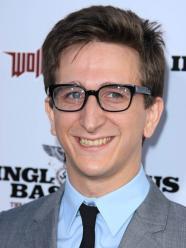 Paul Robert Rust is an American actor, comedian and writer.  Rust appears as a frequent guest on the Comedy Bang Bang podcast, where he is best known for his "New No Nos" segment.

He is currently working with Paul Ruebens on writing an upcoming Pee-Wee Herman film, that will be produced by Judd Apatow.
2009 - I Love You Beth Cooper
2009 - Inglourious Basterds