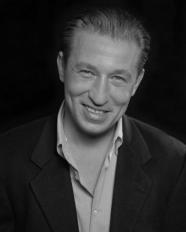 Pasha D. Lychnikoff (Russian: Павел Лычникофф) (born February 16, 1967), also credited as Pavel Lychnikoff or Pasha Lychnikoff, is aRussian television, film and theatre actor, who lives and works in the United States.
Pasha D. Lychnikoff was born in Moscow, where he later received formal training at the Russian Academy of Theatre Arts (also known as GITIS from 1934 to 1991). In the early 1990s Lychnikoff moved to the United States. Since his subsequent move to Los Angeles, he has appeared in many TV-movies and -series and feature films. He is noted for his roles as the telegraph operator Blazanov in HBO'sDeadwood series and as Russian mobster Vadim Youchenko in the movie Trade. He also appears as Howard Wolowitz's Russian cosmonaut crewmate Dimitri on the popular TV series The Big Bang Theory. Lychnikoff has also made several stage appearances in Russia and the U.S. His self-written play The Shelter, which he also directed, was nominated for the Californian Ovation Award in five categories, and Lychnikoff's performance in it received positive reviews from a number of critics.
2008 - A Thousand Years of Good Prayers