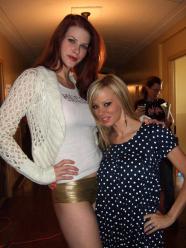 Penny Drake is an American Independent film actress and model.[She is the daughter of a Southern Baptist pastor.

Her modelling career since 2008 has included work for Herra Couture, Flora Zeta and Ed Hardy. In June 2009 she appeared as the video game character Bayonetta at the Electronic Entertainment Expo (E3) in Los Angeles.

Drake's movie appearances since 2005 include parts in the hits Sin City and The 40 Year Old Virgin. She also stars in Zombie Strippers alongside Jenna Jameson and Robert Englund, and in Necrosis played with Michael Berryman and George Stults.

Description above from the Wikipedia article Penny Drake, licensed under CC-BY-SA, full list of contributors on Wikipedia.​
2008 - Zombie Strippers