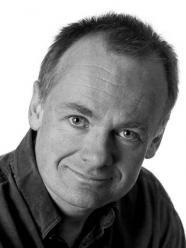 Per Christian Ellefsenborn February 14, 1954
Educated at the Norwegian Theater School from 1974-1977.Per Christian Ellefsen spent his first two years as an actor at Sogn og Fjordane Teater, before returning to Oslo as a freelance actor. He was soon engaged at the National Theater, where he, among other things, played Peter in "The Diary of Anne Frank".He became employed at Oslo Nye Teater during the spring of 1980, an engagement lasting for 16 years.He acted in several comedies during the years at Oslo Nye Teater, but he also undertook several serious roles:
- The son in "Det er min vår i høst" - also broadcasted on national TV.
- Lead in "Mine hemmelige memoarer"
- Karlsson in "Karlsson på taket"
- Lead in "Loppen i øret"
- Smerdjakov in "Brødrene Karamasow"
- His last role at Oslo Nye Teater was The Idiot i "The Idiot" av DostojevskijEllefsen has been employed at the Nathioal Theater since 1997. His first role at the theater was Goldberg in "The Goldberg Variations".He played in the the successful "Rett i lomma" at Chateau Neuf, and has also been a guest actor at Riksteateret.He has, ever since he was a child, worked for the national radio, and in 1997 he was Peer in the radio anniversary play "Peer Gynt".Ellefsen has participated in several TV productions, mostly entertainment. His role as Birgir in "Absolutt Blåmandag" was his film debut.In 1999 and 2000 the play "Elling og Kjell Bjarne" at Oslo Nye Teater was a huge success with Ellefsen as Elling. It was played 125 times, and seen by 60 000 people. The movie "Elling" came in March 2001, still with Ellefsen as the lead. This year he won the price for best Nordic actor for his interpretation of the main character. "Elling" was in February 2002 nominated for Oscar - for best foreign movie.Another successful play "Panikk i kulissene" premiered at Chateau Neuf in September 2001.Ellefsen had the role as Trosten in NRKs major TV series "Soria Moria" in 2000-2001.He has dubbed several movies, e.g. The Hyena in "The Lion King" andThe Fox in "Pinoccio".As Ellefsen is half Swedish, he has had several jobs in Swedish.
2010 - Rare Exports: A Christmas Tale