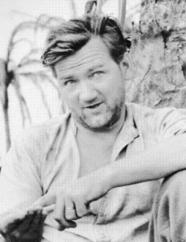 Percy Herbert (31 July 1920 - 6 December 1992) was an English character actor who often played soldiers, most notably in The Bridge on the River Kwai, The Wild Geese and Tunes of Glory. However, he was equally at home in comedies (Barnacle Bill, Call Me Bwana, two Carry On films) and science fiction (One Million Years B.C., Mysterious Island). He also acted on television; he was a regular on the short-lived series Cimarron Strip, starring Stuart Whitman.

Herbert was a soldier and prisoner of war during World War II, captured by the Japanese when they took Singapore.

He was discovered by Dame Sybil Thorndike.

Herbert died of a heart attack on 6 December 1992.

Description above from the Wikipedia article Percy Herbert (actor), licensed under CC-BY-SA, full list of contributors on Wikipedia.
1957 - The Bridge On The River Kwai