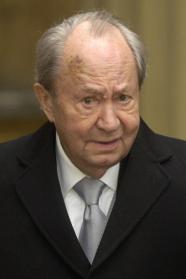 Peter Sallis, OBE (born 1 February 1921) is an English actor and entertainer, well-known for his work on British television. Although he was born and brought up in London, his two most notable roles require him to adopt the accents and mannerisms of a Northerner.

Sallis is best known for his role as the main character Norman Clegg in the long-running British TV comedy Last of the Summer Wine, set in a Yorkshire town. He was the longest serving cast member, appearing in all 295 episodes, and by the end of the show's run was the only one surviving from the programme's first episode in 1973. He also appeared in all 13 of the episodes of the prequel series First of the Summer Wine as Norman Clegg's father. He is also famous for providing the voice of Wallace in the Wallace and Gromit films, again using a northern accent.

Description above from the Wikipedia article Peter Sallis, licensed under CC-BY-SA, full list of contributors on Wikipedia.
2005 - Wallace & Gromit: The Curse Of The Were-Rabbit