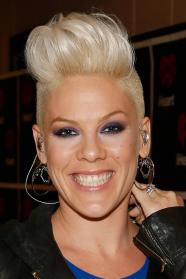 Alecia Beth Moore (born September 8, 1979), better known by her stage name, Pink (stylized as P!nk), is an American singer-songwriter and musician. She released her first single "There You Go", on her first album, the R&B-oriented Can't Take Me Home, in 2000 via LaFace Records, which garnered commercial success. Her more pop rock-oriented second studio album, Missundaztood, which began a marked shift in the sound of her music, was released in 2001 and was a huge success worldwide.

Pink released her third album, Try This, in November 2003, which although less successful commercially than her previous release, still managed to sell around 3 million copies and earned her a Grammy for Best Female Rock Vocal Performance for the single "Trouble". Her fourth album, I'm Not Dead, was released in April 2006. The album generated several hit singles, including "Stupid Girls", "U + Ur Hand" and "Who Knew". Both "U + Ur Hand" and "Who Knew" went to #1 on the pop chart. Her fifth album, Funhouse, was released in late October 2008 and was preceded by her first solo number one on the Billboard Hot 100, "So What". The album notched three other Top 20 hits: "Sober", "Please Don't Leave Me" and "Glitter in the Air". On November 15, 2010, she released her first compilation, Greatest Hits... So Far!!!.