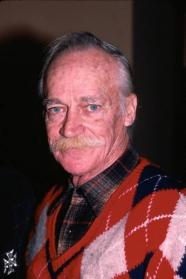 Richard W. Farnsworth (September 1, 1920 – October 6, 2000) was an American actor and stuntman. His film career began in 1937; however, he achieved his greatest success for his performances in The Grey Fox (1982) and The Straight Story (1999), for which he received a nomination for an Academy Award for Best Actor.

Description above from the Wikipedia article Richard Farnsworth, licensed under CC-BY-SA, full list of contributors on Wikipedia.
1990 - The Two Jakes
1990 - Misery