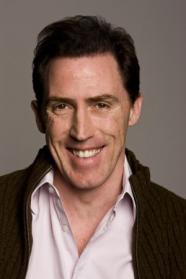 Rob Brydon (born Robert Brydon Jones; 3 May 1965) is a BAFTA-nominated Welsh actor, comedian, radio and television presenter, singer and impressionist. He played Uncle Bryn in the comedy drama Gavin and Stacey, is the host of panel quiz show Would I Lie To You?, plays a parody of himself in Rob Brydon's Annually Retentive and played Keith Barret in the BBC comedy Marion and Geoff and its spin-off The Keith Barret Show. Brydon has worked with a number of comedians and actors, notably Steve Coogan and Julia Davis.