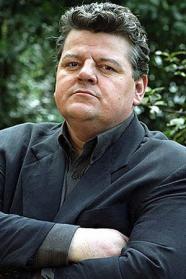 Robbie Coltrane, is a Scottish actor, comedian and author. He is known both for his role as Dr Eddie "Fitz" Fitzgerald in the British TV series Cracker and as Rubeus Hagrid in the Harry Potter films.

Coltrane was born Anthony Robert McMillan in Rutherglen, South Lanarkshire, the son of Jean McMillan Ross, a teacher and pianist, and Ian Baxter McMillan, a general practitioner who also served as a forensic police surgeon. He has an older sister, Annie, and a late younger sister, Jane.

Coltrane moved into acting in his early twenties, taking the stage name Coltrane (in tribute to jazz saxophonist John Coltrane) and working in theatre and stand-up comedy. Coltrane soon moved into films, obtaining roles in a number of movies such as Flash Gordon. On television, he also appeared as Samuel Johnson in Blackadder.