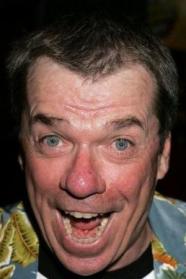 Rodger Albert Bumpass (born November 20, 1951) is an American character actor and voice actor Noted as his long-running-role as Squidward Tentacles on the hit series SpongeBob SquarePants. He also voiced Professor Membrane on Invader Zim, created by Jhonen Vasquez. Bumpass had many other credits in animated films, animated television series, and video games. Bumpass' voice acting credits go back as far as a 1962 episode of The Jetsons. He is the son-in-law of actor Jerry Stiller and Anne Meara and brother-in-law of actor Ben Stiller. He has repeatedly denied that his name is, in fact, a joke.

Description above from the Wikipedia article Rodger Bumpass, licensed under CC-BY-SA, full list of contributors on Wikipedia.
2004 - The SpongeBob SquarePants Movie
2015 - The SpongeBob Movie: Sponge Out of Water