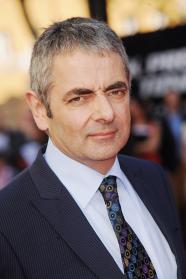 Rowan Sebastian Atkinson (born 6 January 1955) is an English comedian, screenwriter, and actor. He is most famous for his work on the satirical sketch comedy show Not The Nine O'Clock News, and the sitcoms Blackadder, Mr. Bean, and The Thin Blue Line. He has been listed in The Observer as one of the 50 funniest actors in British comedy, and amongst the top 50 comedy actors ever in a 2005 poll of fellow comedians.