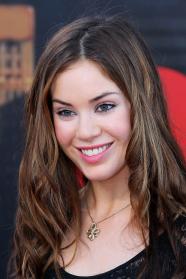 Actress/model Roxanne McKee was born in Canada back on August 10, 1980 but was soon after, raised in England. Roxanne studied at the University of London earning a degree in Social Policy and Political Studies. After her school years, Roxanne worked in a few different job positions including Human Resources, working as a waitress and as a recruitment consultant. These job avenues were all steps towards her saving to attend drama school. Her motivation behind her schooling, Roxanne said was so she would have an alternative career path, should her true ambition to be in acting fail. However, she did not attend drama school, once she was accepted from an open casting for the series "Hollyoaks" in 2005. She had a three-year run with the series, including her character being in several notable story angles. She appeared also on EastEnders: E20 (2010) (TV) before on joining the cast of "Game of Thrones", in 2011.
2014 - The Legend of Hercules