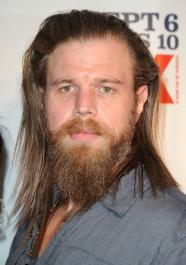 Ryan Douglas Hurst (born June 19, 1976) is an American actor who perhaps most notably starred as Gerry Bertier, an All-American linebacker in Disney's Remember the Titans and as Alison's brother, Michael, in the show Medium. He also played the role of football player Lump Hudson in The Ladykillers, appeared in the movie We Were Soldiers as Sgt. Savage, and starred in the TNT show Wanted. In Saving Private Ryan, Hurst portrays a paratrooper who, because of temporary hearing loss, cannot understand Captain Miller's questions about sighting Private Ryan which forces Miller (played by Tom Hanks) to ask the questions in writing. He currently plays Opie on the FX network series Sons of Anarchy.

Description above from the Wikipedia article Ryan Hurst, licensed under CC-BY-SA, full list of contributors on Wikipedia.
2004 - The Ladykillers