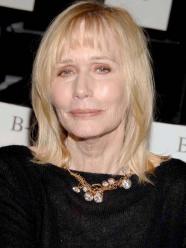 Sally Kellerman (born June 2, 1937) is an American actress and singer known for her role as Major Margaret "Hot Lips" Houlihan in the film MASH (1970), for which she was nominated for an Oscar for Best Actress in a Supporting Role.

Description above from the Wikipedia article Sally Kellerman, licensed under CC-BY-SA, full list of contributors on Wikipedia.
1970 - MASH
1986 - Back to School
2006 - Boynton Beach Club