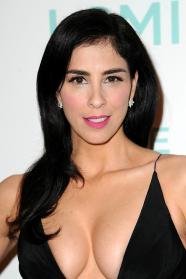 Sarah Kate Silverman (born December 1, 1970) is an American comedian, writer, actress, singer and musician. Although usually credited as Sarah Silverman, she is sometimes credited by her nickname, Big S. Her satirical comedy addresses social taboos and controversial topics such as racism, sexism, and religion.

Silverman first gained notice as a writer and occasional performer on Saturday Night Live. She starred in and produced The Sarah Silverman Program, which ran from 2007 to 2010, on Comedy Central. She often performs her act mocking bigotry and stereotypes of ethnic groups and religious denominations by having her comic character endorse them in an ironic fashion..