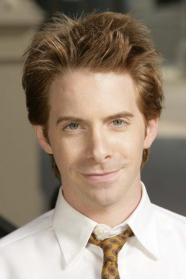 Seth Benjamin Gesshel-Green (born February 8, 1974) is an American actor, comedian, voice actor, and television producer. He is well known for his role as Daniel "Oz" Osbourne in Buffy the Vampire Slayer, as well as Dr. Evil's son Scott in the Austin Powers series of comedy films and Mitch Miller in That '70s Show. He also voices the characters of Chris Griffin on Family Guy, Lieutenant Gibbs in Titan Maximum, Jeff "Joker" Moreau in the Mass Effect video game series, and is one of the creators and producers of the stop motion comedy series Robot Chicken, in which he also voices many characters. Green has appeared in many other movies, such as Rat Race, The Italian Job, Can't Hardly Wait, Without a Paddle, and as a child in the horror film Stephen King's It.