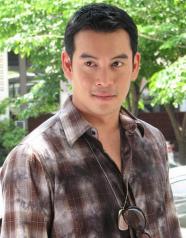 His films include O-Negative (1998) with Tata Young, directed by Yuthlert Sippapak. His latest film is Bangkok Dangerous with Nicolas Cage.

He is a famous thai actor in high demand, due to his extraordinary acting skills. He has acted in numerous popular lakorns, sitcoms and commercials. He is also credited under the stage names Shahkrit Yamnarm, Charkrit Ngamengarm and Krit.

Description above from the Wikipedia article Chakrit Yamnam, licensed under CC-BY-SA, full list of contributors on Wikipedia.
2008 - Bangkok Dangerous