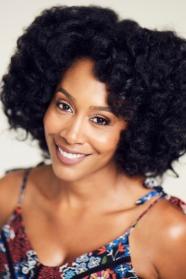 Born in Detroit, Michigan, Simone always knew she was meant to perform. Growing up, Simone spent years playing the violin, singing, and playing sports before she decided to focus on acting. While in her first year as an English major at Howard University, she decided to take a theatre for non-majors course. This class solidified her commitment to acting, and she graduated with a minor in Theatre arts.

Following graduation, Simone traveled to Oxford, England, where she participated in the British American Drama Academy taking Master Classes with greats Ben Kingsley, Alan Rickman, and Jane Lapotaire. She then honed her craft performing in regional theatre in Detroit, Michigan before packing it all up and moving to Los Angeles.

Simone has experienced success filming several short films, features and has begun writing and producing her own series of one act plays. In 2010, Simone will begin production on a self-written web series, and a documentary.
2018 - Jinn