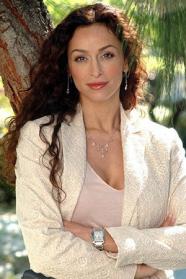 Sofia Milos (born 27 September 1969) is an Italian/Greek actress. She is best known for her role as Yelina Salas on CSI: Miami.

Milos was born in Zurich, Switzerland, to an Italian father and a Greek mother. In her teens she entered a local beauty pageant, and after winning first prize went on to win the provincial, regional and national contests as well. Milos studied acting at the Beverly Hills Playhouse in The United States under acting coach Milton Katselas. Milos is a member of the Church of Scientology.

Milos speaks English, Italian, French and German (including Swiss German) fluently, and can also carry a basic conversation in Greek and Spanish.

In 2011, she was supposed to take the main role of a female detective in the long-running German crime drama Tatort and its newly introduced Swiss team. However, after the first episode was shot, Swiss Television declined to broadcast the pilot due to lack of quality. Nathalie Wapper, Head of culture for the Swiss Television, and director Markus Imboden criticized even Milos' portrayal directly, saying she was "an absolute miscast".

Description above from the Wikipedia article Sofia Milos, licensed under CC-BY-SA, full list of contributors on Wikipedia.
​
2003 - Passionada