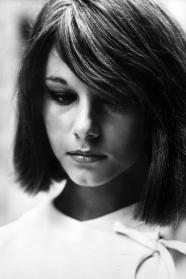 From Wikipedia, the free encyclopedia:

Stefania Sandrelli (born 5 June 1946 in Viareggio, Province of Lucca) is an Italian actress, famous for her many roles in the commedia all'Italiana, starting from 1960s.

She was 15 years old when she starred in Divorce, Italian Style, as Marcello Mastroianni's cousin, Angela.

She was born in Viareggio, Tuscany. She had a long relationship with Italian singer-songwriter Gino Paoli. Their daughter Amanda Sandrelli, born in 1964, is also an actress.

Description above from the Wikipedia article Stefania Sandrelli, licensed under CC-BY-SA, full list of contributors on Wikipedia.
2004 - A Talking Picture