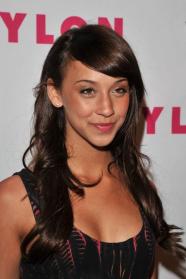 Stella Maeve Johnston (born November 14, 1989) is a young American television and film actress. She is best known for her roles in Gossip Girl and in the indie films Harold and Remember the Daze. Johnston plays Sandy West in The Runaways, a 2010 biographical film, based on the 1970s all-girl rock band of the same name.
2010 - The Runaways
2013 - Cloned: The Recreator Chronicles