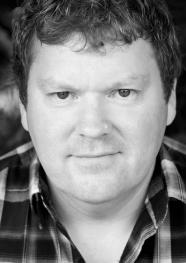 Stephen Hunter was born in Wellington, New Zealand and was unwittingly cast as "the clown" from a young age. The label clearly sat well with Stephen, who quickly developed a great sense of comic timing, and a reputation as the "go to" funny guy. Very early in his career the camera beaconed. And after honing his skills on New Zealand Television, Stephen headed for Australia.

It didn't take long for his talents to be recognized - and not just for comedy. In 2006, after several guest roles on both sides of the Tasman, Stephen landed the part of Sharpie in the second series of the 2 time Logie Award winning drama Love My Way. This was closely followed in 2008 by a leading guest role on Channel 7's long running Australian medical drama All Saints, a role that showed his depth and versatility as a dramatic actor.

But it is his comedic ability that has Stephen in high demand on screen in both New Zealand and Australia. Stints on Nickelodeans The GO Show and ABC's Review with Miles Barlow only confirmed that status.

His strong resonant voice has also seen Stephen become one of Australasia's top Voice actors. These skills have been used to promote some of Australia & New Zealand's top companies and products. And in 2009, Stephen landed a lead role in the ABC animated series CJ the DJ, as the lovable Si.