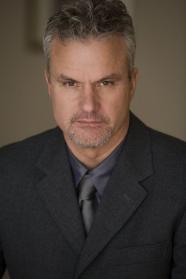 The son of a Costa Rican mother and an Oregon lumberjack, Steve was born in Long Beach, California. His family moved to Cocoa Beach where he often watched the missile launches from the cape. When Universal Studios Florida opened in 1990 Steve was chosen to be one of the opening cast members: "Who ya gonna call?". Television production in Florida was busy in the early 90s and Steve guest-starred in multiple episodes of SeaQuest 2032 (1993), Pointman (1995) and Unsolved Mysteries (1987) as well as Tom Hanks' HBO award- winning mini-series From the Earth to the Moon (1998) and the USA original movie Perfect Crime (1997) with Mitzi Kapture. With the slow down of production in Florida in the late 90s, Steve became an art auctioneer, traveling around the world on cruise ships. Having quenched his wanderlust, he is acting again and now based in Los Angeles.
2018 - Inside