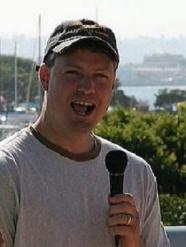 Steven J. Wiebe (born January 3, 1969) is an algebra teacher at Finn Hill Junior High, a school in Kirkland, Washington. Wiebe is best known as a two time world champion of Donkey Kong, most recently holding the title from the 20th of September, 2010 to the 10th of January, 2011 with a high score of 1,064,500 points. Wiebe was the first person to achieve over a million points in the arcade game Donkey Kong with a score of 1,006,600 on July 4, 2004. He is one of the primary subjects of the 2007 documentary The King of Kong: A Fistful of Quarters.

Description above from the Wikipedia article Steve Wiebe, licensed under CC-BY-SA, full list of contributors on Wikipedia.
2007 - The King of Kong: A Fistful of Quarters