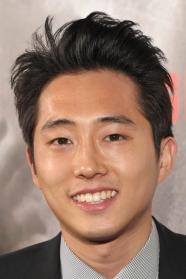 Steven Yeun (born 21 December 1983) (Korean name in Hangul 연상엽, Yeun Sang Yeop) is a Korean-born American actor. Yeun is currently starring in the role as Glenn in AMC's original series, The Walking Dead since 2010. Other than The Walking Dead, Yeun guest starred in the critically acclaimed American sit-com, The Big Bang Theory, as Sebastian in 2010, an independent film, and a couple shorts. He has also completed voice work for the Crysis video game series.

Description above from the Wikipedia article Steven Yeun, licensed under CC-BY-SA, full list of contributors on Wikipedia.
2014 - I Origins
2017 - The Star
2018 - Sorry to Bother You