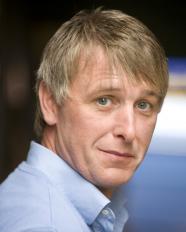 Stuart Graham (born January 9, 1942) was a British former Grand Prix motorcycle road racer. He was the son of the 1949 500cc world champion, Leslie Graham. His best season was in 1967 when he won two Grand Prix races and finished the year in third place in both the 50cc and the 125cc world championships.

Description above from the Wikipedia article  Stuart Graham, licensed under CC-BY-SA, full list of contributors on Wikipedia.
2009 - Hunger
2015 - The Hallow
2018 - The Cured