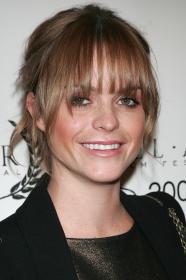 Taryn Manning (born November 6, 1978) is an American actress, fashion designer, and singer-songwriter. She is the vocalist for electronic duo Boomkat and co-owner of the clothing brand Born Uniqorn. Manning gained her first major role as an actress in 2001 when she played the role of Maddy in Crazy/Beautiful. She is well-known for her film portrayals in Crossroads, 8 Mile, A Lot Like Love, Hustle & Flow, Weirdsville and Jack and Jill vs. the World. She has appeared in film genres ranging from drama and comedy to science fiction.