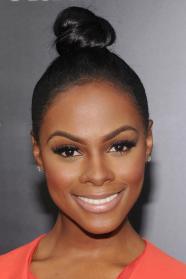 Private Life: Born in Queens, New York, Sumpter studied at Marymount Manhattan College where she majored in communications. She began her career modeling and appeared in various commercials for products including Hewlett-Packard and Liz Claiborne's Curve fragrances.

Career: In 2004, she served as the co-host for the N network series Best Friend's Date. The following year she landed the role of Layla Williamson on One Life to Live.