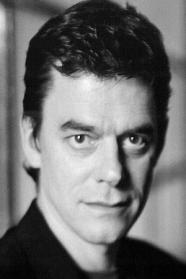 Tom McCamus (born July 25, 1955) is an award-winning Canadian film and theatre actor who is most widely known for his work on the science-fiction television show Mutant X.
McCamus was born in Winnipeg, Manitoba, Canada, but was brought up in London, Ontario from the age of ten when his family moved across country. While attending London's Oakridge Secondary school, McCamus became intrigued with the theatre, and went on to attend the University of Windsor's school of dramatic art.
His film debut came in director Paul Donovan's quirky time-travel comedy Norman's Awesome Experience, otherwise known as A Switch in Time (1989). In 1991 McCamus gained critical acclaim for his role as a mental patient in the historical drama Beautiful Dreamers.
McCamus' most noted film role is that of struggling actor Henry Adler in I Love a Man in Uniform (1993), directed by David Wellington. As a result of the role, he won the Genie Award for Best Actor. McCamus has been nominated for the Genie Award on two occasions since, for Long Day's Journey Into Night (1996), also directed by Wellington, in which McCamus reprised his successful performance as Edmund Tyrone from the Stratford Festival, and for the Oscar-nominated The Sweet Hereafter (1997), directed by Atom Egoyan.
Recently McCamus has come to the attention of a wider audience, playing the villainous Mason Eckhart in the Marvel TV series Mutant X. Although McCamus proved sufficiently popular that he appeared in every episode of the first season, something that was not originally planned, he quit the show to star as Richard III and Mack the Knife at the Stratford Festival. He only returned to Mutant X to make occasional appearances in the second and third seasons.
Currently McCamus is dividing his time between theatre and film work, and has recently starred in the CBC film Waking Up Walter: The Walter Gretzky Story as famous hockey dad Walter Gretzky, the Canadian production Shake Hands with the Devil, and in the Ken Finkleman miniseries At The Hotel.
He will appear as Captain Hook in Stratford in 2010, and also in Dangerous Liaisons.
McCamus is married to theatre and occasional TV actress Chick Reid. They live in Warkworth, Ontario.

Description above from the Wikipedia article Tom McCamus, licensed under CC-BY-SA, full list of contributors on Wikipedia.
2010 - Cairo Time