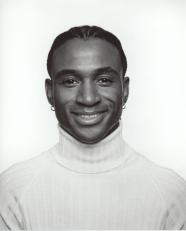 Tommy Davidson (born November 10, 1963) is an American comedian, film and television actor.
Born in Washington, D.C., Davidson was adopted when he was 2-years-old. He is the product of an interracial adoption, with his parents being Caucasian and he being African-American. He attended high school at Bethesda-Chevy Chase High School, in Bethesda, Maryland. After graduating, he enrolled at the University of the District of Columbia, but dropped out shortly thereafter.