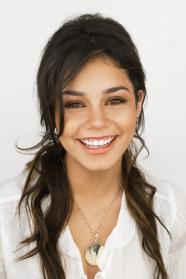 Vanessa Anne Hudgens (born December 14, 1988, height 5' 1" (1,55 m)) is an American actress and singer, who is best known for her portrayal of the character Gabriella Montez in the High School Musical series. She also earned critical acclaim for her role in the 2009 film Bandslam.

As an actress, Hudgens has appeared in several television programs including Quintuplets, Still Standing, The Brothers García, Drake & Josh, and The Suite Life of Zack & Cody. She made her screen debut in the 2003 drama film Thirteen as Noel. She got her first starring role in the 2004 science-fiction-adventure film Thunderbirds as Tintin.

Hudgens' debut album V was released on September 26, 2006. The album entered the Billboard 200 at number twenty four, and was later certified Gold. Hudgens released her second album, Identified, on July 1, 2008 in the U.S.

Hudgens' fame has also been marked by scandal caused by the release of private, self-taken nude photographs of herself on the Internet without her permission on several occasions. Since a third and anonymous release of these images, the FBI is now investigating these leaked photos in an attempt to find the source in connection with similar investigations regarding such hackings around altogether about 50 Hollywood celebrities.