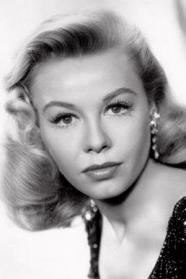 Vera-Ellen began dancing at the age of 10, and a few years later became one of the youngest Rockettes. She appeared in several Broadway musicals until she was spotted by film producer Samuel Goldwyn in 1945. She was only 24 years old when Goldwyn cast her opposite Danny Kaye in Wonder Man (1945). She danced with Fred Astaire in Three Little Words (1950) and with Gene Kelly in On the Town (1949). Blonde, slim of build, and a dancing sensation, she appeared in a string of light-hearted but successful films. Vera-Ellen retired from acting in the late 1950s.

Vera's career died down in the late 1950s once filmed musicals lost their fashion. It was later discovered that, due to the dancer's compulsive dieting obsession, she had silently battled anorexia throughout much of the 50s before anyone was even aware or doctors had even coined the term or devised treatments. Moreover, she had developed severe arthritis which forced an early retirement. In order to combat it, she reverted back to taking dance lessons again. The worst blows suffered, however, was in her personal life. On top of of two two failed marriages, she lost her only child, Victoria Ellen Rothschild, to Sudden Infant Death Syndrome (SIDS) in 1963. With one unhappy and tragic event compounded by another, she became a virtual recluse.

Little was heard for decades until it was discovered that she had died on August 30, 1981, at age 60 following a long bout with cancer at UCLA Medical Center in Los Angeles. She was buried at Glen Haven Memorial Park in Sylmar, California. Perhaps less remembered today compared to several of the big stars that shared the stage with her, Vera-Ellen was a lithe and lovely presence who deserved a better personal life than she got. Nevertheless, she has provided true film lovers with a lasting legacy and can easily be considered one of Hollywood's finest dancing legends.
1954 - White Christmas