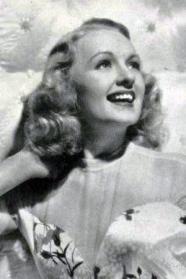 She was born in Charlotte, North Carolina. She appeared in a number of movies in the 1930s and 1940s, including Holiday Inn, and became particularly associated with musicals. She left the movie business for almost three decades before returning to the silver screen for a few films in the 1980s. She died in Burbank, California.

Description above from the Wikipedia article Virginia Dale, licensed under CC-BY-SA, full list of contributors on Wikipedia.
1942 - Holiday Inn