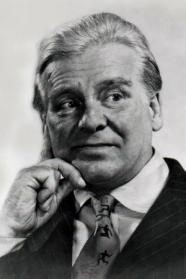 Wallace Ford (12 February 1898 – 11 June 1966) was an English movie and television actor who, with his friendly appearance and stocky build later in life, appeared in a number of movie westerns and B-movies.

Born Samuel Jones Grundy in Bolton, Lancashire, England, he spent childhood in a Dr. Barnardo's home. At an early age he was adopted by a farmer from Manitoba, Canada where he was ill treated. About age eleven, he ran away and did odd jobs later becoming an usher in a theatre.

Following his discharge from the Army after WWI, he became a vaudeville actor in a stock company before performing on Broadway.

He started on a film career when Metro-Goldwyn-Mayer gave him part in the film Possessed and went on to appear in over 200 films including 13 directed by John Ford, through the two men were unrelated.

He also appeared in a 1964 episode of The Andy Griffith Show as Roger Hanover, Aunt Bee's old flame. He is buried with an unmarked grave in Culver City's Holy Cross Cemetery.

Description above from the Wikipedia article Wallace Ford, licensed under CC-BY-SA, full list of contributors on Wikipedia.
1943 - Shadow Of A Doubt