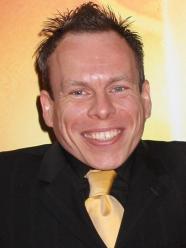 From Wikipedia, the free encyclopedia. Warwick Ashley Davis (born 3 February 1970) is an English actor. Davis is known for playing the title characters in Willow and the Leprechaun series of films; other prominent roles include Wicket W. Warrick in Star Wars Episode VI: Return of the Jedi, Professor Filius Flitwick and Griphook in the Harry Potter movies, Marvin the Paranoid Android in The Hitchhiker's Guide to the Galaxy, as well as Nikabrik in the Walden Media version of Prince Caspian and Reepicheep in the BBC television versions of Prince Caspian and Voyage of the Dawn Treader and Mr Glimfeather the owl in The Silver Chair. Davis has a condition resulting in dwarfism, and stands at 3 ft 6 in (1.07 m) tall.