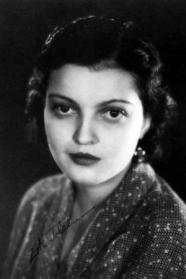 Zita Johann (July 14, 1904 – September 17, 1993) was an American actress, best known for her role as Princess Ankhesenamón in Karl Freund's 1932 film version of The Mummy, co-starring with Boris Karloff. A Banat German, she was born Elisabeth Johann in the village of Deutschbentschek (near Temesvar), Austria-Hungary (now Timişoara, Romania). Her father, a hussar officer named Stefan Johann, emigrated with his family to the United States in 1911. She debuted on Broadway in 1924 and made her first film appearance in D. W. Griffith's 1931 film The Struggle. After seven films, she quit to work in theater, starring with John Houseman, to whom she was married 1929-1933, and with Orson Welles. She also taught acting to people with learning disorders. Johann married three times. She made her last film appearance in the 1986 horror film Raiders of the Living Dead. She died in 1993 at age 89 in Nyack, New York. She was cremated and her ashes were scattered in a stream in upstate New York.

Description above from the Wikipedia article Zita Johann, licensed under CC-BY-SA, full list of contributors on Wikipedia.
1932 - The Mummy (1932)